Wild perros (Era of the Sun) Prologue
posted by Moonstorm100

The full moon was mostrando bright, lighting up the night sky, with some help from the stars. Dark storm clouds gathered over head. The trees rustled in the warm wind, as it blew across the open plains. The césped, hierba bowed to the fight that was yet to come. And the Antelopes retreated in fear for they didn’t want anything to do with the carnivore’s revelry.
Night shadows crept through the open land, as many shadows crossed over the line that led to life and death. New scents roamed the air as the pack members of Storm of blazing fire, entered the territory of their rival enemies Moon, of never ending sky o just referred to as Moon for short.
Soon, the pack Storm of blazing fire, otherwise known as Storm for short, stopped at the dried up rivers edge. Across the other side of the dried up river, was the territory of the pack Moon.
One of the wild perros stopped and glanced back at the others. Another one took a step adelante, hacia adelante and nodded to the leading dog. The leading dog smiled and stared back across the dried up river while the one that nodded to the lead dog, came to stand beside his alpha.
“Do tu see anything, Razorthorn?” The lead dog asked. Razorthorn nodded. “Affirmative Thistletail, I see shadows creeping through the long grass.” Razorthorn turned his head and smiled at the alpha male Thistletail. Thistletail smiled back.
“Alright then” Thistletail glanced back at his follows and nodded towards the dried up river. The following dogs, lowered themselves as they crept farther toward the dried river, led por Thistletail.
As the members of Storm crept closer to the territory of Moon, Thistletail could make out the bulging eyes and shadows of their rivals hidden in the darkness.
Then a dog leaped from the tall golden grass, on the other side of the dried river and let out a battle cry before making a dash towards the Storm dogs. Rows of Moon perros followed their alphas lead. Thistletail snarled and let out his own battle cry.
The perros of Storm and Moon charged into battle behind their leaders and in heartbeats, the air was filled with the raging sound of battle!
Thistletail charged for the alpha male of Moon but was preempted por one of his followers. The enemy snarled at Thistletail and both males leaped for each other. Thistletail grasped his jaws around the enemy’s throat. The dog tried to use his teeth and short claws to free him from the leader of Storms grasped, but Thistletail was too strong. He was about to kill the enemy when another dog grasped Thistletail’s scruff and pulled him off the Moon dog.
Less than a heartbeat after being released the Moon dog yelped in pain and retreated into the bushes, back towards its own territory.
Thistletail glared at the dog that had pulled him off the Moon dog, but his anger had turned to interest as he noticed that the alpha male of Moon was standing before him. He smiled in satisfaction and lunged at the enemy. The enemy alpha didn’t try to run and seemed más than willing to fight Thistletail.
“Your days are numbered, old timer! Call off your followers now and maybe I’ll let tu live!” The Moon alpha spat. “I have many más moons with my pack mates!” Thistletail snarled, “And I came here to fight, so I will fight, Fangblaze!” Fangblaze sneered and lunged at Thistletail again both perros tussled on the ground for a few más heartbeats. Lightning flashed and revealed two eyes gazing at the battling males; the dog was hidden in the darkness and glared at both alphas but didn’t jump in to help either of them, just watched in silence. Thunder blazed in the sky and más lighting flashed, as Thistletail was finally able to grab hold of Fangblazes throat and bite down 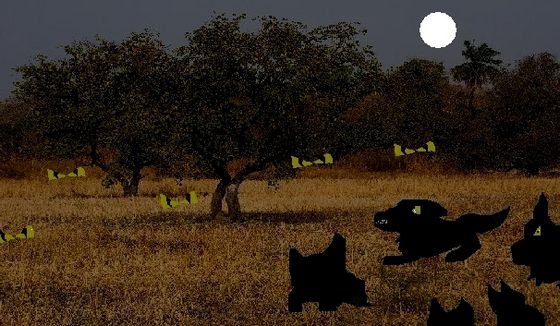 Bluefire7777 but somthing else happens
Moonstorm100 u ruening the book!
Wilddog7 its a little confusing let me see........theres a battle between Moon and Storm...........and Storms leader kills Moons leader...........but then why didnt it say he was dead?
Wild perros (Era of the Sun) Chapter 3
posted by Moonstorm100

The group goes on a raid!
Chapter 3

As Apollo awoke the siguiente morning, he looked around. During the night, he had slept in a huge black cave with the rest of the pack.
At sunset, the día before, he discovered that they like to go outside and watch the sun disappear, they called it a gathering. During the gathering, they shared news of reciente activities and bragged about their successes. Although, while the pack was outside Apollo heard them whispering about him. They didn’t like the idea of an outsider joining their pack; no one seemed to like him. They kept their distance...
continue reading...
1
Wild perros (Era of the Sun) Chapter 1
posted by Moonstorm100

These are the two sisters of Sol!
Chapter 1

“Oh, isn’t he just beautiful?” A female’s voice was heard. “Yes, he is rather cute, but then again, all pups are cut, Lunadapple.” Another female pointed out.
Who are they, I wondered, where am I? A tongue rasped the pups back, “wake up, my pup” A female spoke reassuringly to the pup. The pup knew Lunadapple was talking; he squirmed for a heartbeat longer then began to slowly open his eyes.
He gazed around at his surroundings. He was lying down in a huge black cave, not much sunlight shown through the entrance; he guessed it must be close to midnight. He looked up,...
continue reading...
More Cards
1234567891011