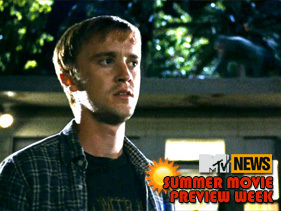 On Wednesday morning, Tom Felton walked us through "Harry Potter and the Deathly Hallows, Part 2" as part of mtv News' Summer Movie Preview. Now, Felton continues the season's blockbuster sneak peeks with his insights into "Rise of the Planet of the Apes," the new franchise film in which he stars, which both reboots the mythology and provides a prequel to the story first introduced in the late 1960s.

The new, Rupert Wyatt-directed film features James Franco as a scientist testing an Alzheimer's cure on our simian friends. But an unexpected mutation leads to a super-smart ape population, which spells trouble for the human race. Felton plays the son of the owner of a facility in which the apes — CGI creations based on motion-capture technology from the digital effects house behind "Avatar" — are kept. Calling us up from his inicial in the U.K., Felton discussed his favorito! scenes in the film, what it's like to work with actors in mo-cap suits playing apes and how his character fits into the en general, general story.

MTV: There'd been basically radio silence on "Apes," and then fotos and video started to roll out a few weeks ago, followed por the trailer, which got a very positive reaction.

Tom Felton: Yeah, through Twitter I could tell the reactions were good. And just my own reaction as a fan, when I see a trailer like that, I get very excited. I watched it a hundred times. The special effects are ridiculous. The first pregunta when I showed it to my friends was, "Wow, how did they get the monkeys so well trained?" I'm like, "None of them were real!" It's quite weird to see so much CG effects in the real world, not some computer-generated world like "Avatar."

MTV: It was also nice to see the tone wasn't jokey but rather dark and serious.

Felton: It was quite dark. I amor that. A lot of people, when tu say "Apes," they think of Tim Burton's one and [think] that is what this one is going to be like. It couldn't be further from the truth. This movie is set in the world that we know, rather than some alien-like planet. It's not that it's scary, but it is so much más realistic. There's a real sense that it could actually happen

MTV: This is what would happen if tu put James Franco in charge of a lab of apes.

Felton: Oh, tu know it. tu know it! All hell would break loose.

MTV: It must also be nice to see yourself in a movie without Draco Malfoy's bleached-blond hair.

Felton: It's funny tu say that, because the first time we went out to Vancouver for the screen tests, they had me there in the outfit and [director] Rupert was like, "I like it, but tu need blond hair. I need tu to look Californian." I was like, "Seriously? Really?" He was like, "Yes!" And I was like, "OK, if that's what tu want." Then he digged me in the ribs and [said] he was just winding me up. So we got off to a good start, me and Rupert. But he was the first one to say we want tu looking as different as possible. That was nice, because he wanted me based on what he'd seen previously in "Potter" but also something completely different.

MTV: Is there one scene that you're particularly excited about?

Felton: There were so many. tu know, I'm used to "Potter" secrecy, but this is even más so. They've got me under lock and key on this one. There's no book, so no one knows the story. I had some great one-on-one scenes with Andy Serkis, who plays the lead ape, Caesar. Those were amazing, because not only was he doing the body movements flawlessly, but also facial expressions and sounds.

MTV: Was it always guys in motion-capture suits o did tu ever have to act opposite a tenis ball o the thin air?

Felton: It's such a strange system. They film it all with the stunt performers who have learned for six months how to mover like an ape. It's actually quite scary, watching a dozen men bouncing around the room like apes. They'd film that three times, then we'd film one blank where it's just the humans, then they match up stuff. They have an army of guys with notepads marking all sorts of numbers and graphs and stuff. I don't know how they pull it all off in the end. It's crazy!

Felton: Yeah, when Caesar, our lead ape, gets too big for James Franco's character to look after anymore, they have to put him into a facility. Brian Cox, who plays my dad, owns it, and I work there. Needless to say, I'm supposed to be looking after the apes, but I really don't do that job very well. I don't get on well with them and I'm not that friendly with them. I'm kind of what instigates Caesar's revolt against humans. Before that, he only knew James Franco's character. He thought all humans were going to be friendly and nice. It's through my father and my character that he learns the perils of humanity and how bad we really are.

MTV: So, after Draco, tu play another bad guy?

Felton: Well, he's not a good guy. People aren't going to be cheering for me in this film, either. It's villainy, but on a different level.

It's Summer Movie vista previa Week, and mtv News will be bringing tu exclusive interviews, clips and fotos for the most anticipated films of the coming months. Get ready to gorge on inside looks at "Captain America," "The Hangover Part II," "X-Men: First Class," "Cowboys & Aliens" and more.

Check out everything we've got on "Rise of the Planet of the Apes."
kathyism, xHardcoreBunnyx and 2 others like this
Thecharliejay cool
e2mma2weasle3 YEah pretty cool 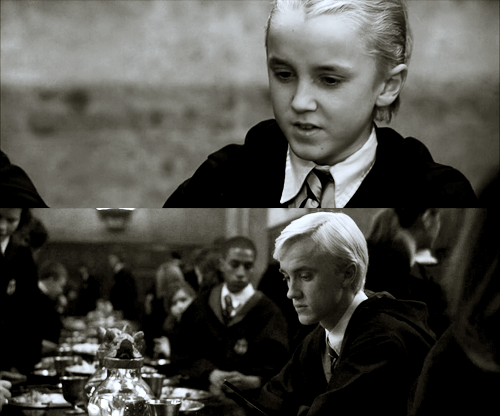 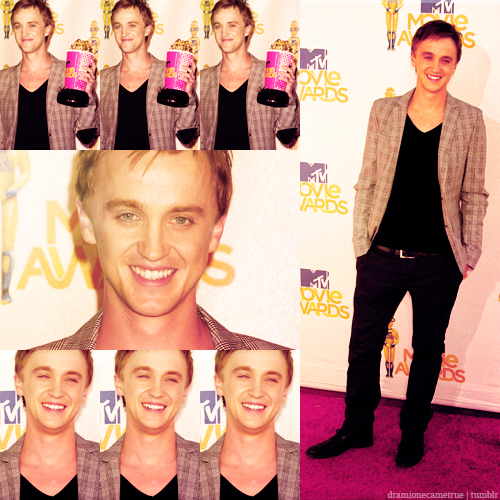 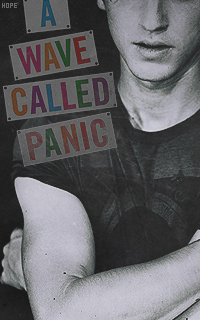 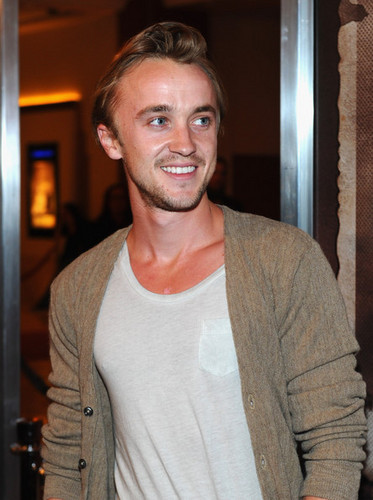 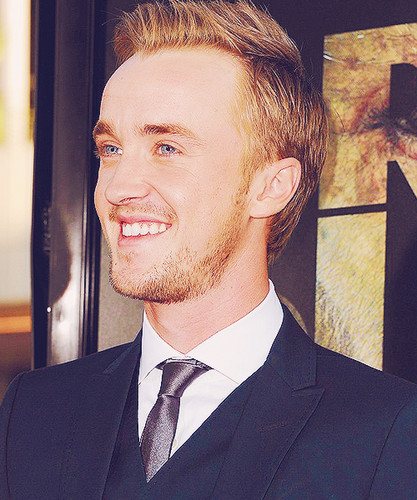 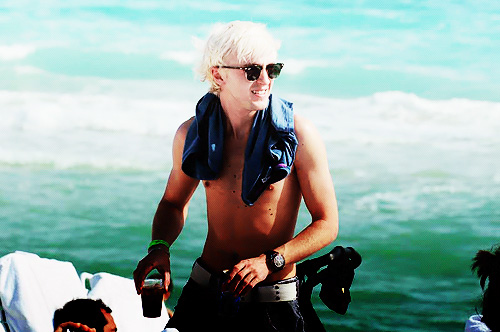 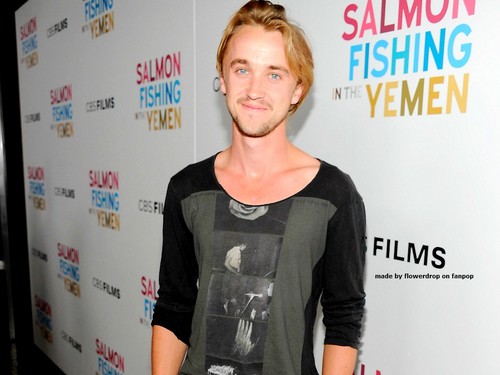 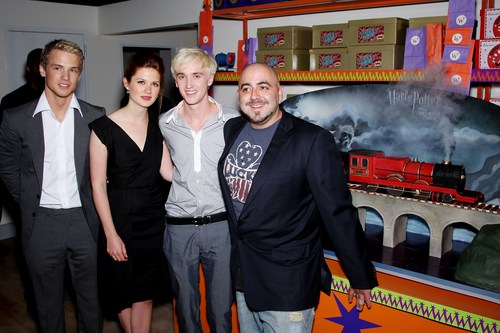 3
Harry Potter & The Half Blood Prince : NY After Party (2009)
added by alessiamonari 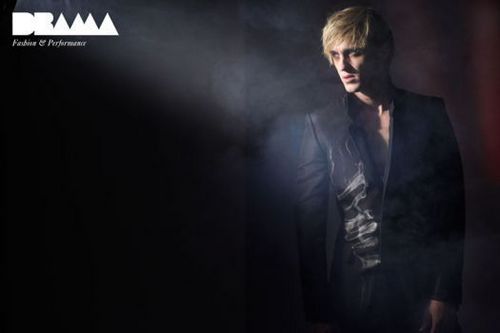 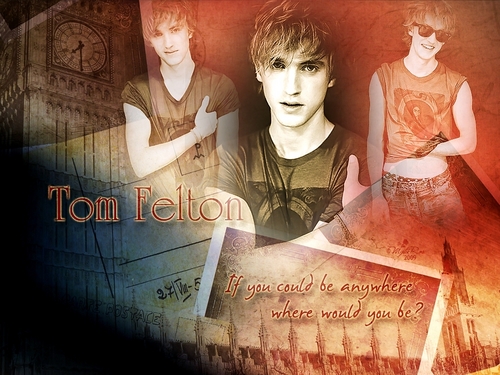 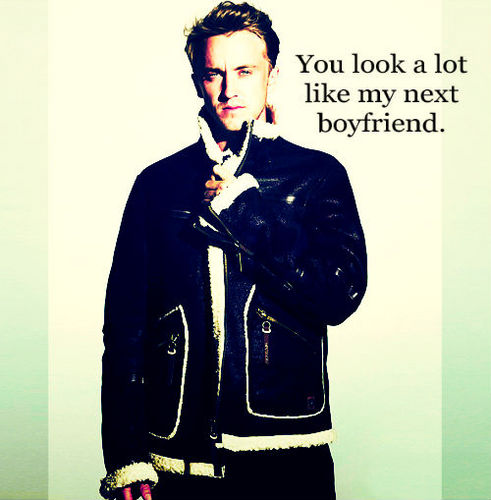 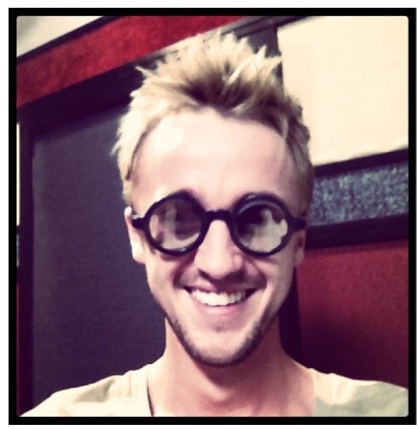 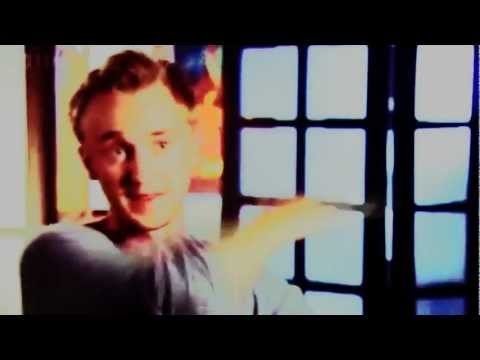 3
Tom Felton | Sexy and I know it [for Ylva]
added by JerseyGirlBritt
Made por and belongs to EmmaWatson1203.
video
tom felton
fanvid 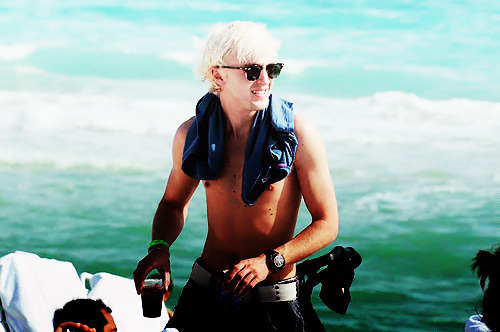