4
Don't tu Know Nos Iam Mortui 6; Ibinu
posted by zanhar1
Layla walked inside and quickly slammed the door behind her.

"I thought tu dicho it wasn't as dark." Icy glanced up.

"I was wrong." Darcy practically whispered.

"I can't get it out of her. I, I'm usually always able to get them to leave. But this one. This one latched on tight." Darcy led the other witch up the stairs.

Musa lie face up on the bed, her body covered in lashes, cuts, bruises, and punctures.

"She did most of it herself." Darcy pointed out. "I tried getting a real exorcist. Refused to set foot here."

"But of course." Icy took a asiento across the room.

"I was hoping tu could try." Darcy prompted.

"Me? tu want me to do the exorcism?" Icy gave a cynical laugh.

"They seem to listen to tu best when tu tell them to screw off." Darcy pointed out.

Icy let out a sigh and drew closer to the bed. She began to mutter words in many tongues. And at the words 'část cesty' the fairy let out an awful sound akin to ear splitting shriek mixed horrendously with the most inhuman snarl.

"What the hell is she doing!? What is she saying?" Stormy shouted as she burst into the room--a group of faeries not far behind.

"You can't tell me what to do. Where to go. Where to infest. She's mine. Mine. Mine and mine to keep." Icy translated. "It would appear that Darcy is right. We have a determined one."

"Well then what are tu waiting for!? tu so need to do something!" Stella threw her hands up.

"I'm working on it." Icy hissed and began muttering.

Musa began quivering viciously. She rolled to the side and then back on to her back. And then she jolted up. Icy continued the muttering. The fairy let out another pained howl one in her own vocal range and then one laced with that of a demon. She hunched over and began coughing. Coughing until scarlet stained the cama sheet.

"Stop it you're hurting her!" Tecna yelled. Icy ignored the fairy and kept chanting. The coughing came on más vigorously. And she toppled off the bed. "I dicho stop!" Tecna yelled again, this time giving the witch a forceful shove.

Icy's facial features tensed in new found blood lust. "You want me to let her die?" She asked. "I let her die." The woman didn't hide the venom leaking into her words.

"You're already killing her." Stella accused.

"No, I'm helping her. It is killing her. And if I don't get it out she'll die anyhow. So? Do tu want her to die fighting o die without ever having a chance?"

No one spoke. After a moment Icy answered the silence. "That's what I thought. Darcy, Stormy, why don't tu two give me a hand."

The witches nodded and continued where Icy had left off.

Icy lifted a hand to her stinging face. Upon drawing it back she found it painted in blood. "Don't tu think I won't hurt her" she hissed giving the fairy a rápido, swift kick in the face.

"Si non habeat, non potest." The fairy repeated. This time she began to claw at her own face; dragging her nails down her cheeks--slowly at first and por the third swipe más rapidly. Taking más and más flesh with it.

"Someone restrain her!" Icy demanded. Stormy grabbed the fairy's arms and pinned them behind her back. This elicited más screams and growls and an occasional dangerously low grunt. Icy leaned in closer, her incantation much faster. At this point the fairy was kicking and struggling. And she broke from Stormy's hold. No sooner had she freed herself did she land a puñetazo, ponche to Icy's face. "Son of a bitch!" Icy hissed quickly withdrawing. "Shit." She covered her throbbing eye.

Darcy continued to mutter the banishing spell. All the while Musa had taken to clawing at her face again. This time she went for her own eyes.

Layla turned and darted out of the room, Stella hot on her trail. "I so think I'm gonna be sick." The blond wailed.

"Bathroom's that way." Layla pointed. "I gotta. I'm gonna go get some fresh air while the sun is still up." She glanced at the clock; a half hora would be más than enough time for that.

"She's going to claw her own eyes out!" Stormy hollered.

"Well let's just delay that, shall we." Icy murmured as she covered the fairy's eyes in a sheet of ice. The demon within her hollered.

"Icy." Came a voice from in the door way. No. It wasn't one voice. There were two. One very soft, deep and wispy and the other--Icy turned to face her--Bloom's tired voice.

"I thought tu took care of her!" Icy shouted at Darcy, frankly angered por the fact that literally all hell breaking loose. To think all she planned on doing was lectura her novel.

"I did! I had her fixed, she was recovering and..." Darcy started.

"And tu left her alone. I thought tu were the smart one." Icy huffed.

"Icy I can help." Bloom offered.

"Is this Bloom speaking o the spirit. Either which way I can guarantee that you're useless in this situation." Icy sassed.

"This is Jyne." Bloom cocked her head slightly.

"I'm a bit busy sweetheart." Icy sneered. "Jyne is the least of our problems anyhow."

"Don't tell me what to do Jyne." Icy yelled.

"Her name is Bloom." Tecna corrected.

"Bloom...Jyne, whatever! They're sharing a body and right now Jyne is doing the talking!" Icy declared.

Icy whipped her head back around only to see Musa lunge at her. "Son of a..." Icy started and her head met the floor.

Bloom-Jyne let out a sigh. "Why don't tu ever listen to me?"

"Bite me Jyne." Icy muttered before blacking out. Her body faded away.

"That's what happens when tu fight a demon like Ibinu. Don't worry, she'll be back." Bloom-Jyne shrugged. She pressed her index finger to Musa's head and muttered a cleansing spell. The fairy dropped to the floor, a dark nube spilled from her mouth and drifted to the ceiling. "And she will be fine too."

Jyne stepped out of Bloom's body. Flora yelped and jumped back. "You're face..."

"Well I don't know what tu were expecting." Jyne shrugged, the maggots dangling from her empty eye sockets wriggling slightly around her peeling flesh.

"Beautiful? Normal? Who are tu kidding? tu really are the most painfully optimistic faeries. I always thought Icy was just exaggerating."

"I've only been haunting her house since she moved in." Tecna assumed Jyne would be rolling her eyes if she had them. "She usually complains to me. At first she would tell me to stop listening in and let her complain in the privacy of her own lonesome bedroom. But I didn't listen and so she just started complaining to me. Mostly about tu guys."

"Why do tu listen?" Flora asked.

"Because that's my job. To listen to her." Jyne answered.

"What do tu mean." Flora asked.

The entity gave a rotting smirk and stepped through the wall.

"Is no one going to ask how Icy used magic when none of us can?" Tecna asked.
************************************************************
Layla took a deep breath letting in the autumn air. It tasted of pine and ash trees mixed with a hint of cider and burning leaves. Normally Layla would invite Flora outside so they could enjoy the brisk autumn air together. But this time was different. The air was still no más welcoming than it was on the first night. In fact, the más Layla focused in on it, the más uncased she felt. Layla got to her feet and stretched her arms. What was she thinking coming out here anyhow!? She'd just seen a demented little boy out there. She turned to go inside when something struck her on the head.

"Do ya wanna play with me?" Called a young boy with a British accent. "None of my sisters want to play with me. And mum's a bit busy."

Layla looked up. He was a little boy of about ten, his hair a raven black. Eyes a shade of baby blue.

"Who are you? Where did tu come from." Layla asked.

"My name is Simon. I live around here." He picked up the ball he had thrown at Layla. "Come on, don't tu want to play?"

"I guess I can...for a little while." Layla looked up at the setting sun. "But not for too long."

"Come on then." He laughed and dashed into the forest.

"It'll be fine. I play in here all the time." Simone called and shot her an innocent smile. "I want to mostrar tu where I live."

"Will we have time to get there, is the forest like the shortcut?" Layla asked.

"Sure we will." Simone chuckled. "I have all the time in the world."

Simone ignored her and ran deeper into the forest. Layla could hear the churning of the lake.

"We're here! We're home!" Simone announced as he pushed away some thickets to reveal a murky lake.

"This is my home." He turned around and fixed his eyes on Layla, his eyes turning to a penetrating unnatural blue.
His cloths set fire, the ball dropped from his hand and rolled to Layla's feet.

Words:
These verbs describe what you're doing. Example, if you're fangirling Winx, just say you're Winxing :D If you're madly insane with Enchantix, say you're and Enchantixing! 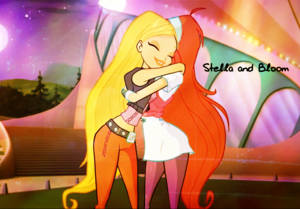 4
Stella and Bloom ♥
added by SummerThunder
Source: I made it. 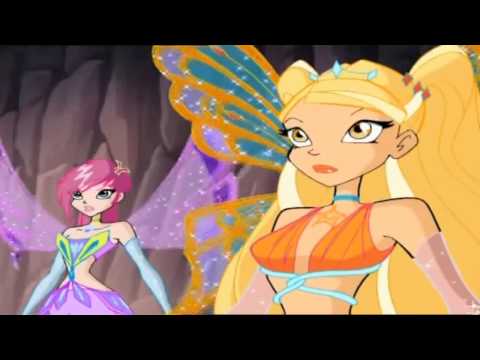 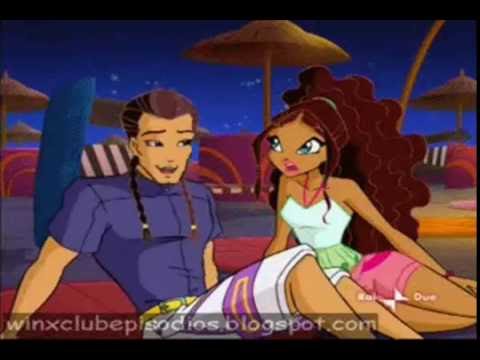 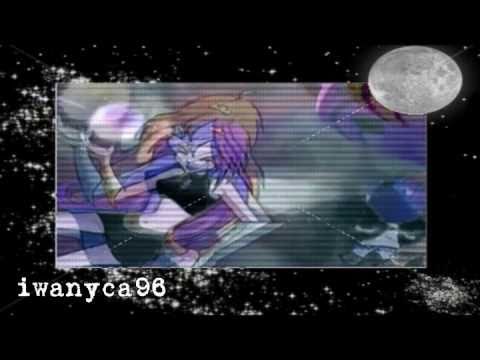 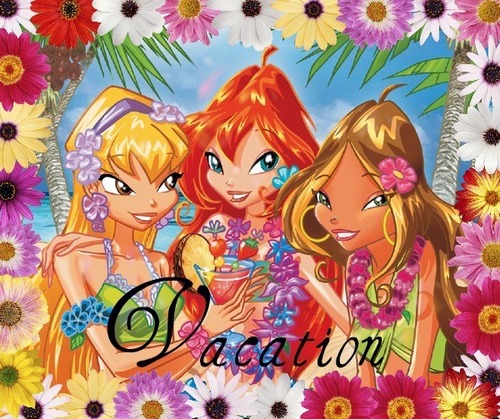 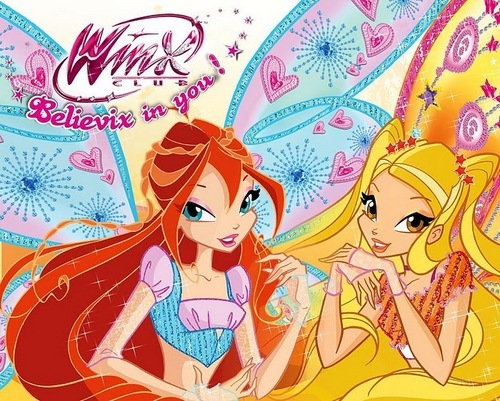 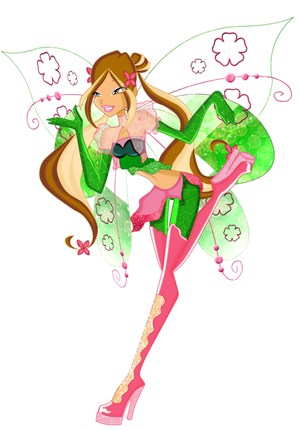 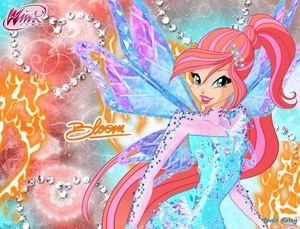 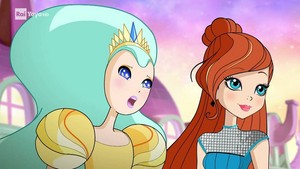 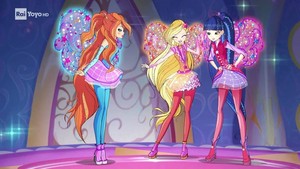 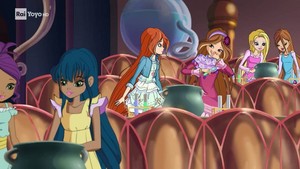 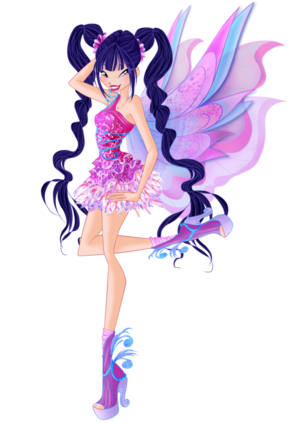 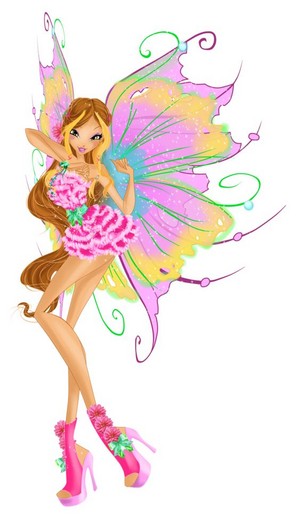 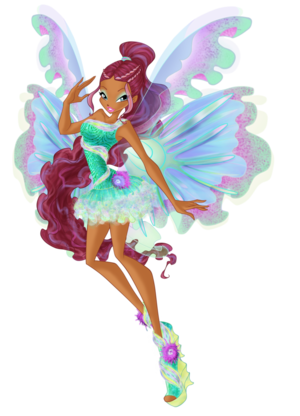 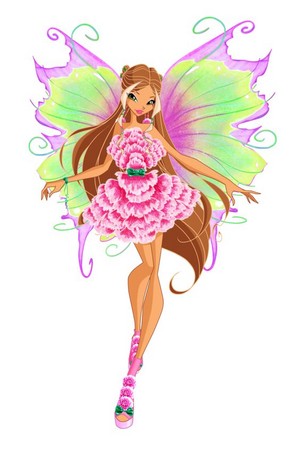 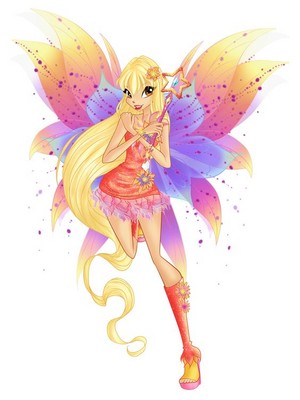 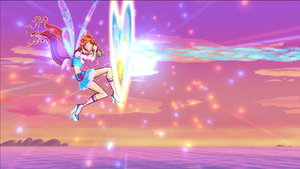