What could happen if a person who was a member of King Henry 8th court had immortaility and was still alive?

I would like to know what could happen if a man lived during the 16th century at the time of King Henry 8th as a courtier who had enlaces with the king, and had eternal life through something he had done? How would he adapt to each century change? This is for an arts project I am doing, and have been asked to draft together a fantasía story from the 16th century to 2001. Any input would be most helpful, especially from Tudor historians. Many thanks. 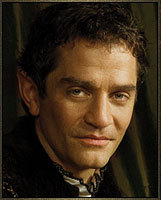