(Other roleplays are on a bit of a hold until I can make sure I have time for long-term plotted roleplays. In the meantime, here’s something for fun.)


A giant fair is taking place. Dozens upon dozens of scientists and inventors flood the streets of the Mobius “Iblicis”, in the Neutral Country, in Lake-Rain City. Portable houses are stationed all over the area, as the metal platforms hovering about the venice-like area mostrar off the many fluids, machines, and creations.

A stand selling DNA-manipulating chips, a green cat-lizard identity-girl mostrando off her Nanite-element-changing abilities (turning her Nanites into lava, plants, etc.), an room titled “avatar-digitizer”, and a large plant-growing stand, holding many vegetables both regular and alien, appear to be gaining the most attention.

As your character(s) walks through the area they pass these. An announcer reminds the public to vote for their favorito! booths from time to time, but before your character(s) is able to an explosion goes off.

Quickly turning around your character(s) notices instantly where the blast came from. The DNA-stand has gone up in smokes with various people running away from it, coughing from the smoke.

Various colores of some kind of goop is spewed all over them, causing the escapees to begin mutating into various different forms, some with arms on their ears, others into trees, and some into piles of goop themselves. None seem to have gone feral but are clearly unhappy with the problem.

Walking lastly from the smoke is a 40 o so year-old lion-fawn centaur, who does little but sigh at the predicament. What happened here? 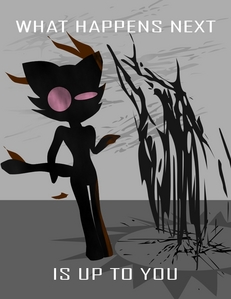 Melvin: I can control certain Nanites, so it honestly wouldn't be something that far out of my jurisdiction.
NintendoFan364 posted hace más de un año