3
REBECCA BLACK'S VIDEO FOR "MY MOMENT"!
posted by ShiningsTar542 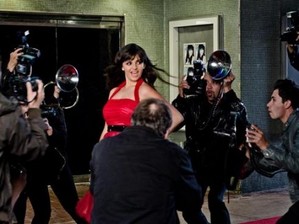 After "Friday" Rebecca Black became a YouTube sensation, with some haters but lots of fans too.

Her new song is called "My Moment" and Rebecca just put it up on YouTube, it currently has 51,506 hits. It is, Rebecca is walking through Hollywood like a star, letting the world know that no matter what, no one will take her dream away.

Rebecca Black has also been nominated for the Teen Choice Awards under the category Web Star. :/

Rebecca Black has a new song coming out on the 18th of July!

The 14-year-old singer will release her new song “My Moment,” which will be available for streaming on YouTube and on Rebecca’s website on July 18th. It will then go on sale on iTunes and other online retailers on July 19th.

But there's more! There's a video in the works, too.

The video for the song will feature footage from Rebecca’s real life, including her last days of middle school and appearances at various awards shows.Cool


What do tu think of her releasing a new song?

SOURCE: JustJared
4
Rebecca Black
posted by boy123
Hi Rebecca Blackers! Rebecca Black Is The New Singer With Her New Hit Single Friday the música Video por Trizzy66 on youtube made her popular with getting 200 million vistas in like 2 weeks!! Will Rebecca Be as popular than GaGa? With más vistas than her!! o Not Hopefully she will be Friday IS A BIG HIT but will her songs like lol and Prom night be más popular than Friday Rebecca is 13 and her birthday is June 21 1997 well her favorito! día is Friday DUH! Rebecca is making more songs even making a album!!!!!!! I think called Friday o LOL!! comentario and fan it become friends with me for information about her and other AMAZING SINGERS LIKE REBECCCA BLACK!!!!!!!!!!!
More Cards
1234567891011