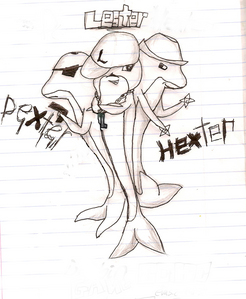 Lester yawned loudly and began to tinker with Dexter's sunglasses, knowing that it annoyed him. Suddenly, Hexter burst into his room. "Lester, bro, can I borrow those?" He asked and motioned to the sunglasses in Lester's flipper. Lester looked up sleepily. "Sure, I but they're not mine, they're Dexter's," Lester handed Hexter the glasses. Hexter grinned evilly, "I know that," He laughed wickedly. "I know that," He repeated and left.

Lester knew that Hexter was up to something, perhaps another prank. He hoped it wasn't going to be on their father, Blowhole, because last time, he got overly angry at Hexter. Lester was about to get up and demand what Hexter was up to, but he decided that was too nosy, so he sat back down and was bored, once again.

Hexter took off his hat and slipped on Dexter's sunglasses. Having an identical twin was useful for pranks. He had been practicing copying Dexter's voice, and had perfected it. He turned down another corner of the lair and soon came across his father. Hexter smiled to himself and drove in his father's 'office'.

"Hello, father," Hexter began, using his best dexter voice. Blowhole turned around. "Yes, what is it, Dexter?" He demanded, sounding annoyed. "Well, tu see, I am- chocolate MOUSE!" Hexter shouted. Blowhole looked confused. "Dexter? What's gotten-" "EAT A MOUNTAIN OF PEANUTS!" Hexter cut his father off, still pretending to be Dexter. Blowhole recoiled a little. "You need to see the doctor, Dexter, this isn't like you..."
Hexter almost burst out laughing. "BOBBY IS A ROCK. EAT A CHOCOLATE!" He yelled as he left the room.

As soon as he was out of earshot, Hexter laughed like a villain. He knew dexter hated the doctor and was a little afraid of the doctor, too" Hexter took off Dexter's sunglasses and put his hat back on. Hexter raced to Lester's room and threw the sunglasses into it. "Thanks, bro!" He called as he zoomed past. He hears a "Um, thanks..Hexter...." Lester called back uncertainly.

dexter made his way to Lester's room. "Can I have them back now?" Lester looked up. "Sure," Lester tossed them to Dexter, much to Dexter's annoyance. "Careful!You could break them!" He snapped. Lester held up a flipper. "Who's the leader? Me." Lester responded in his usual mellow tone. dexter shot his older brother a look of annoyance. Why was he leader? Why not me? dexter thought angrily as he left.

"Dexter?" Came Nori's voice. dexter sighed and went toward his mother. "What?" He snapped. Most teens were snappy. Nori narrowed her eyes and they, briefly, turned red. "Dexter, we're taking tu to the doctor," She told him. Dexter's jaw dropped open. "What?! Why?" He gasped. "Your father dicho tu acted a little....wired," Nori relied simply. dexter grinded his teeth together. Hexter, once again, played a prank on him, and this time, he had gone. Way. Too. Far.

Hexter laughed when dexter came inicial from the doctor. The doctor always put the shot on the snout.There was a rosado, rosa little band-aid on Dexter's snout. When Blowhole and Nori were out of sight, dexter rolled up calmly up to Hexter on his transporter. "Hey, Hexter, do tu want to race?" He drawled, innocent enough. Hexter perked up to the word race. "Sure!"


"On my mark, get set, GO!" dexter called out to his twin. Hexter and dexter zapped full speed across the ocean. dexter knew that Hexter was too focused on racing to notice the nets. Just like planned, Hexter got caught into the fishing nets. "AHHH! Dexter, help!" Hexter called out desperately. dexter keep on racing, pretending not to hear, and Hexter was running out of oxygen.
Shadowpenguin likes this
Nori4Reel wow,not bad
Pluma thanks
Shadowpenguin what's gonna happen to Hexter? :(
Pluma you'll see in part two....
Annacrombie thats what ya get when ya steal someone's sunnies
Pluma it was because Dexter hated the doctor...
Icicle1penguin DIE HEXTER DIE!
Pluma okay, when i'm done with Chapter Two, read it so you know what happens
Pluma http://www.fanpop.com/spots/penguins-of-madagascar/articles/63578/title/lester-dexter-hexter-sibling-rivalry-chapter-two#reply
Pluma http://www.fanpop.com/spots/lester-dexter-and-hexter i've moved it 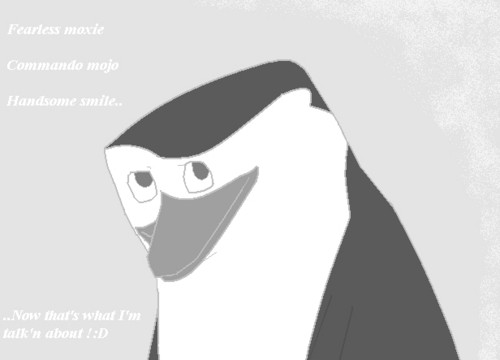 1
Everything in a man
added by Skiparah
Source: MS paint 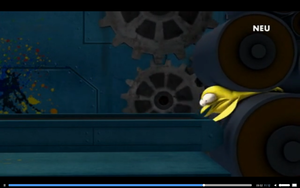 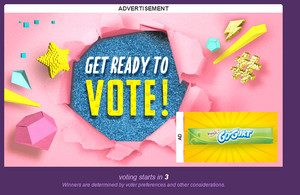 3
Are the KCAs Rigged?
added by SJF_Penguin2
Source: Nickelodeon 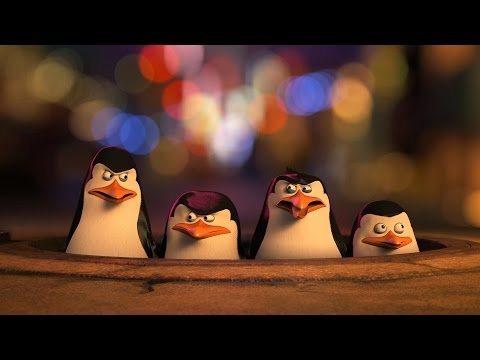 6
Penguins of Madagascar Trailer 2: The Untold Story
added by peacebaby7
It's so funny! I can't choose my favorito! part! LOL! I'm gonna die if I don't see this soon!!
video 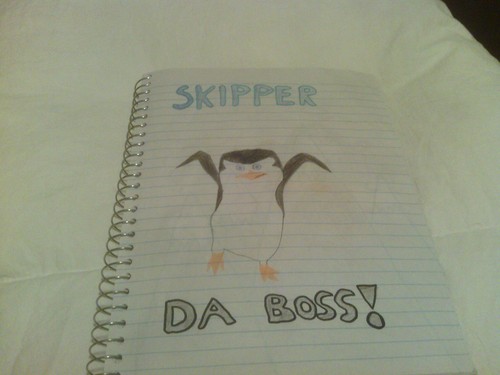 2
My first attempt at drawing Skipper
added by Number1SkippFan
Source: I drew it 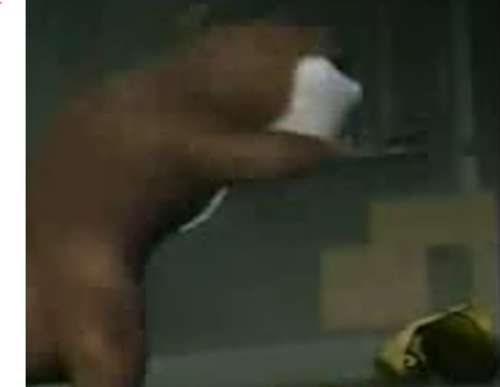 2
Don't scream at Grenade
added by skipperahmad
3
The Arena of Death Chapter 1:
posted by legendary7
The penguins were asleep in their bunks, but whispers from outside the habitat caught Private's attention. His eyes opened wide instantly. He leaped down and scanned his sleeping friends to see if they were awake.
P: "Kowalski, are tu awake?"
K: "What is it, Private?"
P: "I thought I heard some one outside."
K: "Tell Skipper."
P: "Skippah,"
S: "Private! I'm trying to sleep!"
P: "Sorry, Skippah."
S: "Ugh, alright, Rico."
R: "Wah?"
S: "Go out and buscar for anything suspicious."
R: "Aye, aye,"
Rico waddled out sleepishly. As soon as Rico climbed out of the hatch and on parte superior, arriba of the island, he let out a unalarmed...
continue reading...
1
Me&Amanda (Jhoman12/GiveMeKngJuilan)
posted by Jhoman12 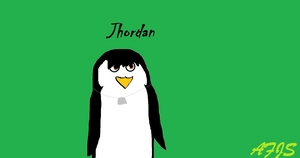 Jhoman12
I Just Wanna Say This to My girlfriend
Jhoman12:Amanda I'm So Sorry About What i Said.I Still amor tu but tu Proably Don't like Me At all now And tu Deserve me At All.=( So If we Get Toghter Again i Swear To not Cheat on you. I Promise If tu Redin this,Well.. Because tu nice and Beutiful And i'm Sometimes Stupid Cause i don't Know What i'm doing. so I always amor tu
For My Love,Amanda Jones A.K.A GiveMekingJuilan
The Lyrics Is Called Lloyd Banks Ft Jeremih - Don't Deserve tu Here's The Lyrics for My Girlfriend Amanda Jones
think I amor you, don't let me get in the way (Get in the way)
Don't...
continue reading...
2
Flightless Lust: Chapter Eighteen
posted by Cornflak 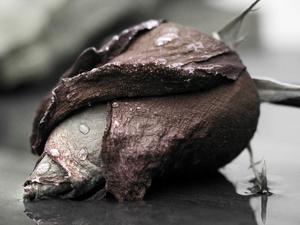 The sun had fallen, and the moon took its place in the dark sky.

The team felt uncomfortable around each other and kept their distance with every minuto that passed. So much had happened in a matter of days. Kowalski once desired Rico’s affection, and then lied to Skipper once he realized what he had done. Rico was sent away for false accusations, and Marlene was eventually denied of Skipper’s love. And now, Private has been struck por a crowbar while obeying his orders, and Skipper is becoming hostile towards his own team.

Kowalski knew that things were only going to get worse. But, that...
continue reading... 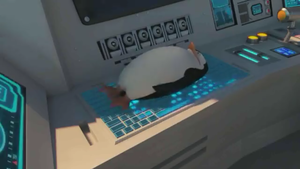 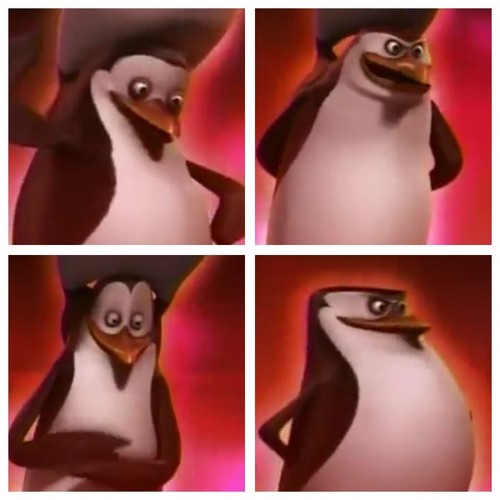 1
Penguins dancing
added by spmana123
3
The legend of the Crystal Falcon- The island friend *Chapter 1*
posted by SkippX101
"Don't do it Private! Please spare him!" Kowalski cried, tears pouring down his cheeks. The flames reflected off the sweat on his face. "i'm sorry Kowalski. This has to end." Private held up a knife, Skipper was flat on the ground...On the other end of the Knife's point...

"YAWN, ah... Another blissful day...UP AND ADAM BOYS!!!!!" Skipper yelled. They all sprang up, except for Starlite, she fell out of her hammock and flat on her face. "Do tu always have to start off my día with a heart-attack? My alarm was less annoying, and it was a person shouting "WAKE UP!! WAKE UP!"...
continue reading...
Tortured... Introduction
posted by spmana123
Blowhole was on our tv, laughing at us demonically, saying that he wasn't trying to take over the world this time but was going to hurt us dearly por doing one thing. My eyes were horrified to see that it was rico tied up siguiente to blowhole. Me, kowalski and private were all surprised, seeing rico there when he dicho he was going to train por the zoo to get fresh air. Rico was sitting there, crying and screaming help please!, it was the first time I actually saw him this scared, I even almost cried. He told us that he had kidnapped rico and took him to his new lair. We all wandered what was going to happen to rico, until blowhole had one of his minions come out with a bat, and told all of us to not look, and told rico"don't worry, I'll make it quick," and raised it in the air, at rico...... 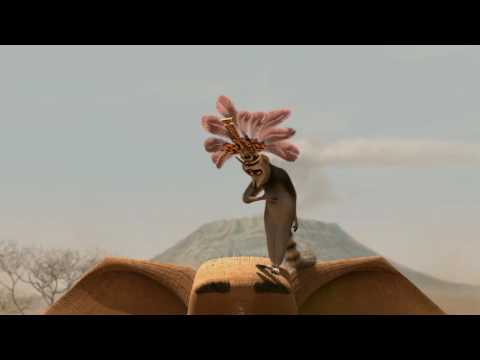 “That one right there is my wishing star,” Marlene pointed up to the heavens, the glow from her flashlight gave her eyes an almost amber sheen in the darkness.

Kowalski had to look away before she'd catch him starring again. Since she had come up, the stars just weren't so interesting as before in her presence. They seemed to dim in comparison to the twinkle of her eyes o the shine of her smile. He was surprised they had been talking so long...
continue reading...
1
A Little Girly To Rescue
posted by EppofangirlXD
A Little Girly To Rescue

"Smile and wave boys, smile and wave," Skipper dicho grinning, looking at the new group of school children who had just stopped por their habitat. It was routine–everyday, they acted cute and did performances for the humans. Nothing ever went wrong on this perfectly sunny day–until now.

The kids were squealing and running around while the teachers tried to keep them at bay. "Okay, now kids," Their teacher was now out of breath, "Line up here with your buddies."

Still squealing and laughing, the kids stumbled in front of their teacher in two lines with their...
continue reading...
More Cards
1234567891011