1
The Nightmare Before navidad part 7
posted by Seanthehedgehog
Jack continued working about why the green light appeared after what he did. It was so bright that Sally saw it, and decided to escape the room she was in.

The door was locked from the other side, so Sally had to escape through the window. It was a long drop down, and Sally had to be careful.

After tying some string onto the window, Sally had to climb down. She was carrying the bag of supplies, but when she went down, the string snapped. Sally then fell to the ground, and her arm fell off.

But, what's this? Sally didn't die somehow, and she started sewing her arm back to where it belonged. Once that was done, Sally continued on her way

When Sally got to the front gate, she noticed a flor that was blooming.

Then suddenly, the flor caught on fire, and died.

It could have been a message to her, but what?

2 B continued
tailsfan111 likes this
alinah_09 hmm...It probably means you're dangerous or have terrible luck
Seanthehedgehog It's neither of those. You'll find out in the next part.
_Laugh_ Cool.
3
Coffee Creme
posted by karinabrony
Mocha frijol, haba sat in the hospital bed, holding her young baby. Latte Dust came in and she handed him the youngster. He looked at her, smiling. A tear came to his eye. Nurse Redheart came in. "You may now choose a name for her, I can give tu some time." She dicho as she closed the door on her way out. "We should call her....Coffee Creme." The father dicho as she handed her to the mother. Her mother smiled and said,"Coffee Creme, welcome to your new life."

Coffee Creme was drawing pictures on the mesa, tabla as a filly. Latte frijol, haba came por and saw. "How nice, Coffee Creme! What is it?" She said. Coffee...
continue reading...
2
Silver Tune's Story 17
posted by _Laugh_
Silver Tune shut her locker harshly, causing her libros to fall. She groaned as she picked them up. The campana rang. Silver Tune looked around and grabbed her back pack. She was walking downstairs and heard a whistle, which meant the buses were leaving. She gasped.

But at the professor's house 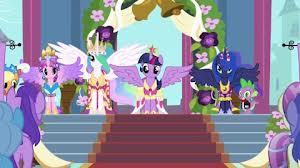 Magical Mystery Cure
Hello guys! Today I will be talking about season 3.

Magical Mystery Cure: In the starting when Twilight Sparkle started singing, I thought it was fantastic. It was a good starting for the last episode. After she saw arco iris Dash's cutie mark on Rarity, then dicho her line, tu know what? There was no theme song. I didn't know why there wasn't a theme song. And at the song "What My Cutie Mark Is Telling Me", Vinyl Scratch was with the background ponies. Probably the creators wanted to make the bronies happy. Then, a song that didn't even sound like MLP at all was on the episode. Twilight has a...
continue reading...
3
My Little SAW: Chapter 1 - Game On
posted by NeonInfernoLord

It was total darkness in…wherever she was. Her eyes adjusted somewhat to it but as far as she knew she was in a hole. She tried to mover but she realized her entire lower body was encased inside of something. It was so snug until the point that she couldn't even feel her lower body.

"H-hello!? Rarity!? Scootaloo!?" Sweetie Belle screamed out but couldn't make anything out in the vacant abyss. She let out little whimpers as another voice rang from her side.

"S-sweetie Belle, I'm right here!" The voice of Scootaloo rang...
continue reading...
2
Chapter 21
posted by Canada24
Once Ditto was able to catch up with what happened, he looked up to see the supposed attacker.

And saw a pissed arco iris Dash growling at him, like an territorial dog o wolf.

"I should of known it was you! tu miserable little weasel!" arco iris angrily growled.

"SHUT UP!" arco iris screamed, evening going as far as hitting him.

"I couldn't care less about any of that lady crap! I could hit tu all I want!" arco iris cried, still angrily.

"So could I!" Ditto cried, and headbutted her against the face, witch succeed in knocking the colorful pegasus off...
continue reading...
2
The Seven Up's part 10
posted by Seanthehedgehog
One night, at a diner.

Waitress: A little late for you?
Ringo: No ma'am. We just lost a friend.
Buddy: *looking over notes*
Ringo: He was a cop, and was working hard to stop arroz Limbo's mafia.
Waitress: arroz Limbo?
Buddy: *sees picture*
Waitress: You're the Seven Up's!
Buddy: *bangs counter*
Click-Clack: *sees Buddy* Are tu ok?
Waitress: What's the matter?
Buddy: *Walks away*

Buddy was going to a subway station. As a subway left, Buddy saw Vito.

Buddy: Hey, how ya doing?
Vito: Good, and you?
Buddy: Fine.
Vito: I heard Sigmund got killed.
Buddy: Where did tu hear that?
Vito: The newspaper.
Buddy: What...
continue reading...
2
Chapter 16
posted by Canada24
"Are we sure we have time Dashie?" Scootaloo asked, as arco iris insisted on a quick flying lesson as they containued waiting for the others.

"Hey.. Rarity is there.. So. They'll be a while yet" arco iris chuckled.

"Wrong!" Came sudden voice, and Dash and Scoot looked over and the saw the rest of the gang finally arriving.

"Good thing we got here when we did, it's getting dark" aguardiente de manzana, applejack insisted, eyeing the sky above them.

Spike spoke up...
continue reading...
2
Con Mane: The Expert Saga part 4/4
posted by Seanthehedgehog
It's the 11th Con Mane story, and it begins in Berlin Germany. Con's best friend Fenix Lighter, an agent for the German Secret Service, M.I.3 is on his way to a marriage. Con, and another poni, pony is with him, until they run into trouble....

I was actually typing that while listening to the estrella wars theme song! lol 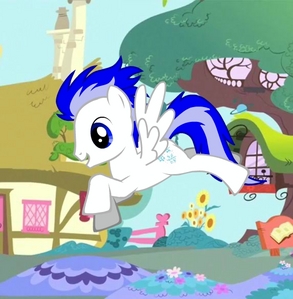 so this is the story of my OC's life...Snow Flake & Orion Stardust...but we go to the very beginning...the story of their parents

"hey!" another pegasus aproaches him,knocking him off a bit

"Oops,sorry" the pegasus dicho helping Winter "name's Flame Hazard...i just transfered here and i was wondering if tu could help me"

Winter sighed then began to speak "...my name's Winter Frost...and sure i can help you..we can even be friends..but watch where...
continue reading...
2
A amor Story: Part 1
posted by applejackrocks1
It was 5:00 in the morning, everypony was sleeping. BUT, Applejack, who is a hard worker, was already showered and working on feeding the animals. She fed the Chickens, geese, turkeys, Parrots, cows, pigs, ducks, and of course, her pet Winona. She yawned as she head back into the House. She looked around, wondering what to feed her family...

Everyone, have their ups, and downs.
Sometimes ups, outnumber the downs.
But not in Trottingham.

Tuck: It's about to rain, and we have holes in the ceiling.
Reverend: We gotta do what we can to pay the taxes.
Tuck: We do, but how? We barely have any money
Sheriff: *walks in* Are tu sure?
Tuck: Ahh! Sheriff! Uhh, if we don't pay the taxes, and tu don't send us to jail we'll pay King John back another way!
Sheriff: Yeah, that's what everypony...
continue reading...
4
The last solstice - Chapter 5: Those purple eyes
posted by NocturnalMirage
The last solstice


Nocturnal Mirage is startled from his sleep por a sharp clashing sound.

“What?!” the dark blue stallion sits up in his cama rapidly.

He looks around in the large room. It takes him a few segundos to realize where he is. Oh, that’s right… you’re here again… he acknowledges. There’s an opened book on his belly. He fell asleep lectura it.

The sound of breaking glass brings him back to reality completely. Mirage shakes his head and puts the book aside. He hears it again. Glass clashing against marble.

“Gosh darn it! The third night in a row!”...
continue reading...
2
ynoP elttiL yM part 2
posted by Seanthehedgehog
Twilight ran to the castillo in Canterlot 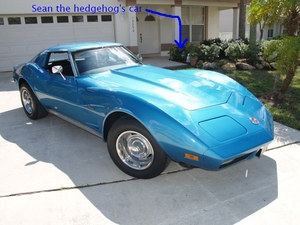 My car
I took every single part of my very first fanfic, and republished it. I made a few edits to it as well.

My name is Sean The Hedgehog. I was born in a place called Mobius, and lived there with my cousin Sonic. Mobius is nice, but it gets attacked a lot por a guy named Robotnik. He noticed how powerful i was, and decided to turn me into a robot. So i moved out of Mobius, and ended up somewhere i liked, but did not know existed. It happened when I used chaos control. I was in my car, with all my stuff packed, shoes, guns, ammo, etc. I drove for a while then used my chaos emerald....
continue reading...
3
Pinkie's Treasure Hunt part 2
posted by Seanthehedgehog
The captain Pinkie Pie was talking about soon arrived in a blue muscle car. That car was a 1969 Chevrolet Corvette.

Rainbow Dash: Is it really?
Sean: Hello everypony.
Bonbon: That's the captain?
Lyra: He's a hedgehog.
Sean: When I was told about this treasure hunt I had to get involved, and Pinkie Pie allowed me to be captain.
Rainbow Dash: Well at least Pinkie was right about the "Can get us out of every situation" part.
Tourists: Ok lets get on. We will see some ponies reenact a crew that got money off an island.
Rainbow Dash: ?
Pinkie Pie: Now that our entire crew is here. Let us set sail.

A part of Ponyville by 2031
por the año 1904 many ponies have traveled the seven seas to find hidden treasure. All of that pirate stuff stopped in the 30's, as a war between Equestria and England started. Before that war, many ponies have found what would now be worth over 60,000 bits today. 2031 however was the año that a poni, pony found a lot of treasure worth 100,000 bits. Here is her story, which started in Ponyville.

Pinkie Pie: You're probably all wondering why I called tu here.
Rainbow Dash: It better not be something random.
Pinkie Pie: It isn't. For There is an island 30 miles from Manehattan with a treasure chest...
continue reading...
2
The Truth about Chrysalis' life: PART 3
posted by soomin1208
With Cadence in a biblioteca downtown....


Cadence: *looks around* Hmmm...where is it..........HA! there it is! (Grabs book that is titled "Black Magic") Your coming inicial with me Mr. Book! *trots back inicial with book*

When Cadence arrived to her room, she immediately started to read the book "Dark Magic".....