hace más de un año PotterForever said…
As long as your writing isn't based on a sexual fantasy, you will be above smeyer.

Yes, exactly... download it. that's in my to do list in november, or december if they don't have the torrent yet ;) oh the little pirate I became.

hace más de un año GemonkDruid said…
Hehe, pirate. I once read this HP fic where Draco wanted to be a half-naked pirate, LOL. and then Umbridge asked him which half, and he said it depended on his mood. :D 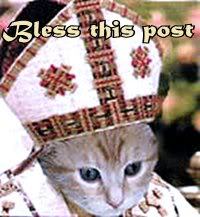 and Draco? Being a pirate? What is it? :DDDDDD

hace más de un año gurl_guhguh13 said…
she actually said that Mary Sues in novels are okay, happy endings make books better, and Smeyer is a genius?! I mean, she is right. Using thesaurus for any unnecessary adjectives(and mind they were used incorrectly), basing it off her fantasies, and clearly copying BLACK and those BLACKS are SHAPESHIFTERS are reaaaallllyy original. Why didn't I think of that?

And she said she cried for an hour and a half after reading the book. I cried for two weeks when Dumbledore, Fred, Tonks, LUPIN, Snape, VOLDEMORT (hehe), and soo many more died. Psh.

So clearly, Smeyer is an idiot in every way.

hace más de un año PotterForever said…
smeyer IS a genius. A genius at marketing anyway. She knows what teenage girls want, and she gave it to them.

hace más de un año gurl_guhguh13 said…
I think Smeyer wrote Twilight to complete what Voldemort wants to do... make everyone in the world enjoy torture.

NOO! That song is stuck in my head! Got any cure? Oh, wait. *turns on Bravest Man I Ever Knew* much better.

hace más de un año FredWRules said…
I counted once when I was trying to sleep, smeyer killed 4 people. JKR killed over 100.
yeah.

hace más de un año PotterForever said…
No, she wrote it becasue she is an idiot, who possibly was high.

hace más de un año PotterForever said…
Have you seen her other videoes? Some are worse.

hace más de un año gurl_guhguh13 said…
lol. I think it's better than the real one.

hace más de un año lucius_malloy said…
D'you guys know the Gred and Forge song Brotherly Love? I think I embedded it at some point... It is possibly the single most disturbing song to have stuck in your head -_-

hace más de un año gurl_guhguh13 said…
^ I haven't watch it yet, but is it really that sad?

I nearly started crying when I first heard phoenix lament by ministry of magic.

MY DAD WAS JUST DANCING TO SPICE GIRLS.
my family is weird.

hace más de un año GemonkDruid said…
I posted this before, but does anyone think I should continue this oneshot?:

Somewhere on a street in the small town of Forks, a certain whiny Mary-Sue called Isabella Swan (though don’t call her that. Her precious ears can’t take it) walked through her front door, humming happily. Usually she had something not-really-wrong wrong in her life that she would bitch about to herself, but now was a special moment. Why? Because she had just visited her boyfriend Edward Cullen.

Sighing at the thought of his scintillating skin, Bella collapsed onto her bed and closed her eyes, dreaming sweet, blissful dreams of Edward and her frolicking in a meadow...

The meadow and her precious Edward morphed quickly into a bar she didn’t recognize. Bella whimpered softly and sat down on a seat, waiting for her sparkle-pire boyfriend like the typical damsel-in-distress that she was.

“He’s not coming; he’s gone. Y’know. ‘Gone’.” a voice said behind her. An old wrinkly man flashed her a toothless smile. Bella stared back at him with chagrin. He’s gone? As in dead? Her life was ruined. Waaah.

“Where’s the nearest cliff, sir?” She asked, getting ready to bawl with all her pent-up wangst (not angst. Never angst. Bella’s too ‘cool’ for angst).

“Please, call me Tom. And just go outside and turn to your left. Have a nice day.”

Bella walked outside, in a daze, when suddenly, a red bolt flew towards her direction. Being a Mary-Sue, she squealed, and also being a Mary-Sue, someone protected her just in time. This someone being another old man, this time a taller one with a nicely grown beard.

A guy stepped away from the shadows and lowered his black hood. Bella let out a scream. He had pale skin, like Edward’s (*drool*), and red eyes, like a newborn vamp. His face was very weird, like a snake’s face. He was absolutely horrible. Except for the skin. Though it didn’t sparkle.

“Enough with the formality, Dumbledore,” he snapped. “Let’s get on with it. Your momma’s so fat that she’s blocks the sunlight from your house so all your plants wilt and drop dead! DEAD!”

“Bitch, please.” Dumbledore scrunched up his face and exclaimed, “Your momma’s so poor that she’s the chairlady of the Wizarding Beggar’s Association!”

“Your momma’s so dumb that she uses her wand as a toilet plunger!”

“Your momma’s so ugly that my momma is now in therapy!”

“Puh-lease! Your momma’s only in therapy because she’s so fat and dumb!”

Bella backed away slowly and ran away, frantically searching for the cliff that the old man was talking about. She, having clumsy as her only flaw, tripped over a teensy-weensy pebble, rolled down a ditch, and hit her head on a tree trunk, finally stopping. She groaned, longed for Edtard, I mean, uh, -ward, and stood up, inspecting her surroundings.

She was in a forest. A big forest. Except that the trees had no leaves; they were just bare leaves. Even though the two had nothing in common, Bella was suddenly reminded of Edward, his head popping up in her small, psychotic, deserves-to-be-checked-up-on-regularly-by-­a-s­hri­nk mind.

She trudged ahead, ignoring the pain in her leg, or the creepy shadows that the trees cast, or the fact that when she rolled down she accidentally squashed and killed a baby bird. No, all she could think of was joining Edward. Some would call it selfishness. Bella calls it ‘badassness!1!!’

Bella was about to give up on searching for the cliff when she heard voices. Arguing voices. Very mad-sounding arguing voices that could possibly have belonged to serial killers.

hace más de un año lucius_malloy said…
ikr, gurl? I have it on my phone :DDD

hace más de un año gurl_guhguh13 said…
No buckets of vomit.
No smoke in the air.
No one there to put out the fire that just started in my hair.

And that was awesome, GD :)

hace más de un año GemonkDruid said…
I was planning on continuing it, but I got distracted by this other fanfic I've written:

Greetings, fellow creatures of the night. Welcome to ‘The Wacky Vampire Blog Full of Craziness’, which is where us vampires can tell our tales of adventure, discuss our certain achievements in slaughtering humans, and, in modern terms, bitch about the accursed slayers!

Now, I’m afraid due to my limited knowledge of modern technology, I am unable to censor this blog from humans, and so I took the time to invent a code:

I will install a special code program later, just to be on the safe side.

Enjoy blogging and may the wonders of the internet amuse you like it did for me.

This message shall be deleted after exactly 7 days.

Spike: What about ‘vampire’, eh, mate? Why aren’t you make a code for that? Idiot.
Dracula: Ah, William. I knew you would find this sooner or later. The reason I did not encode the word ‘vampire’ was because there was no need. Nowadays, vampires are in. Because of that wretched Twilight.
Damon: Or with all the talk of ‘potatoes’, they could just assume we’re crazy.
Stefan: LOL, brother!
Darren: Isn’t kill and murder the same thing? And I agree, Twilight sucks.

Damon: What the hell?
Angel: Sorry, I was going to post something, but I accidentally pressed my elbow onto the keys, and then I tried to delete it and start over, but then I accidentally posted it. 
Spike: You… Wut… Are you actually that technologically retarded?
Darla: Yes, he is. He actually used the phrase “chatty-rooms” once.
Spike: ROFL!
Angel: Darla? You’re… alive? And how did you know I said “chatty-rooms”?
Darla: No, I am not alive, still dust. The PTB have many resources, though. I hacked into one of their laptops. And I know about you saying “chatty-rooms” because the PTB somehow tapes everything you do, cuts out the uninteresting bits, and sell it as a TV series in another dimension.

hace más de un año gurl_guhguh13 said…
@GD lol if Edward's in it, all his blogs would be all about Bella.

hace más de un año GemonkDruid said…
Edward WILL be in it, but of course the other vamps will make fun of him.

sorry, too much. Bye!

ahahaha if I were of the legal age, I'd probably get in trouble for copying money and trying to give it to people- I mean, what?

omg hey peepsul
Previous
Something to say? Sign in with one of these options:
Log in to Fanpop! Not yet registered? Create a new Fanpop account!