Q1- There cute crushes on each other all through Season 1 and everything about them! quotes, duets <3
Q2 - Yess! <3
Q3 - Their Kisses and First Time
Q4 - Finchel finally have their wedding with All the ND's and everyone there and then starting a family eventually
Q5 - Blaine: "Kurt, there’s a moment you say, "Oh, there you are. I’ve been looking for you forever." Watching you do Blackbird this week, that was that moment for me... About you.. You move me, Kurt. And this duet would just be an excuse to spend more time with you" <33
Q6 - (^ I agree) ;) More intimate scenes between them and definitely more Duets
Q7 - Klaine <3
Q8 - Probably not
Q9 - hmm.. quite a few but probably Sweetest66 <3
Q10 - Not have made them Break Up and be married already or at least Season 5
Q11 - Brittana ;)
Q12 - "New York" episode and Pretending and Library scene <3
Q13 - Yes
Q14 - YES!!! love CrissColfer <3

Q1-All of the sweet things Sam did while they were dating to show that he cared and deserved her.
Q2-I guess but VERY briefly
Q3-Their kiss on stage at nationals and then their library scene afterwards where they get bavk together
Q4-Sam going to visit Quinn at Yale and them getting back together
Q5-"Break a leg" "I love you"
Q6-I wanted to see them date for more than an episode and then possibly he could go to New York with her.
Q7-1 <3
Q8-NO! Puckleberry and Finchel do not crossover! At all!
Q9-Maybe Mikfan9
Q10-Quinn wouldnt have cheated on Sam.
Q11-Puckleberry <3
Q12-Where he gives her the promise ring.
Q13-Not that I know of but possibly.
Q14-Definitely! Monchele <3

Q4- In season 5, Brittany visits New York and she meets up with Santana by accident and they end up going out to dinner and then they end up singing "Just Give Me a Reason" and they get back together <3

Q6- NO! I just want Quinn and Puck to end up together. I'm not asking for a marriage, I'm just asking for a nice relationship between the two!

Q7- Finchel all the way.

Q10- I would make sure that they get back together. And when they do they just have an emotional exchange of "I love you"s.

Q12- The Break Up, Heart, and their scenes in All or Nothing

Q1- Their scenes in Prom Queen, because Sam was the first straight guy who made her feel beautiful, and he loved her enough as to fight for her even when she was with someone else.

Q4- Mercedes comes to Lima to help ND with Nationals, they have a talk heart to heart and they realize that they still love each other and don't want to let each other go, so they give them another chance and come back together.

Q6- NO!! We barely could see them when they was dating and we didn't even see their break up! So, no, definitely no! I'd to see more scenes between them, right now since they're not together I'd like to see them having their 'talk' they said on Glease and then coming back, and if is possible another duet.

Q7- It would be between Klaine or Tike, they are my two OTP and I love both couples equallity.

Q8- I think it would actually, I'm working in something like that BTW.

Q9- Well, since they're the favorite couple on the show they're a lot of people here, from people I know it could be Nicky23 or Sweetest66.

Q10- I can't really say what because they had just a few scenes so that would be the first thing: giving them more storylines, also Mercedes not dating with Shane or leave him earlier to be with Sam and they not breaking up.

Q12- Prom Queen, when Sam invites Mercedes to dance, or their duet Human Nature on Michael <33

Q13- I don't know many people who watches Glee (weird I know!) but yeah my sister knows and she ships them as well :)

Q14- Not really, I don't ship Darren and Chris with anyone so far.

Q1- What made you ship 3? :.I like Santana and i can clearly see that Britt makes her happy. also, they are really cute together.

Q2- Is 2 canon? :.Haha Pretty much the first relationship start in the show xD

Q3- What is your favorite moment between 1? :.All their scenes are perfect, breathtaking, and adorable. every scene holds their flawless chemistry and each scene is better than the one before.

Q4- If you could put 3 in any scenario, what would it be? :.Britt goes to visit Santana at NYADA, just a friendly visit. but then they keep talking for a long time and remember how much they miss spending time with each other. and in the end of the day, they want to be together. so they start seeing each other frequently until the time comes to return together as the lovely couple they were.

Q5- Favorite line said between 1? :. This will be a bit long (a scene from Glee;Actually):
{Blaine: "Package for Kurt Hummel!"
Kurt: "Blaine?"
Blaine: "Surprise! Your dad called me out of the blue and wanted to fly me out here just so I can see that look on your face, and it's pretty priceless. Actually, he told me everything, and I promise, I'll keep an eye on him for you. But the reason why I'm here is because he didn't want us to miss out on another important holiday tradition."
Kurt: "Our Christmas duet?"
Blaine: "You are happy to see me, right?"
Kurt: "Yeah, yeah. Always."
Blaine: "Come on, get your skates on, it's almost midnight. Hurry up!"
And then White Christmas comes <3 }

Q6- Did everything you want happen between 2? If not, what did you want to see? :.it was pretty much long relationship and it had all the possible scenes it could get.

Q8- Would a crossover between the three work? :.I guess.

Q9- Who is the most obsessed person you know (other than you) that loves 1? :.hmmm my Sis :) she is as much crazy about them as me. and i'm pretty crazy about them so it's saying something XD

Q10- You get to write what happens/happened to 3. What would you write/change? :.The same as 4

Q12- Favorite episode/scene of 3? :.Their last scene in Sexy. it was so sad and emotional. dunno why it's my best but i found myself torn between it & their "Heart" scenes 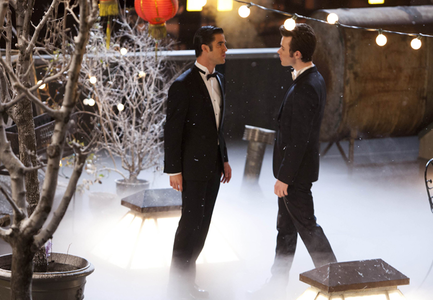 Q4- Brittana would get back together. Don't care how but it needs to happen!

Q6- I wanted to see more scenes between them since they hardly got any.

Q10- Brittany would have graduated when Santana did and they would have went to college together.

Q14- Maybe towards the beginning but now Cory and Lea are together and they seem happy so I won't mess with it.

Q1- they were cutes since the begining and they're both blondies :D
Q2- i don't think so
Q3- when Sugar asked Artie dance on the Sadie hawkins
Q4- Sam realizing he loves Quinn he goes to Yale run to her and kiss her
Q5- S: Artie would you dance with me? A: Sure!
Q6- no i didn't want them to break up
Q7- it depends of the moment right now would be Sugartie
Q8- not really because both of them includes Quinn
Q9- i think no one here ships Sugartie as much as I do
Q10- they would have a reunion next season
Q11- Fuinn
Q12- either Duets or Comeback except for the break up
Q13- yes but not so much people
Q14- i haven't think of it but not really

Q1- What made you ship 3?
Breadsticks moment

Q2- Is 2 canon?
No idea what canon means

Q3- What is your favourite moment between 1?
Kiss after Pretending

Q4- If you could put 3 in any scenario, what would it be?
Kitty is hurt by a boy and Ryder beats him up then comforts Kitty and they become a couple

Q6- Did everything you want happen between 2? If not, what did you want to see?
EVERYTHING

Q8- Would a crossover between the three work?
Dont think so

Q9- Who is the most obsessed person you know (other than you) that loves 1?
No one

Q10- You get to write what happens/happened to 3. What would you write/change?
They declare their love for each other

Q1- What made you ship 3? Moments with Beth.
Q2- Is 2 canon? Yes.
Q3- What is your favourite moment between 1? All of their scenes :)
Q4- If you could put 3 in any scenario, what would it be? Have Puck & Quinn get back together in season 5 :)
Q5- Favourite line said between 1?
Kurt: Why did you pick me to sing that song with? Blaine:: (nervously) Kurt, there’s a moment you say, "Oh, there you are. I’ve been looking for you forever." (places hand on Kurt's) Watching you do Blackbird this week, that was that moment for me... About you. (pause) You move me, Kurt. And this duet would just be an excuse to spend more time with you. (leans in and kisses Kurt, then sheepishly) We should... We should practice. Kurt: (smiles) I thought we were. (kiss again) ”

Q6- Did everything you want happen between 2? If not, what did you want to see? I want Finn & Rachel to get married and have a kid(s).
Q7- If you had to pick a favourite, 1, 2, or 3? 1. Klaine.
Q8- Would a crossover between the three work? Maybe.
Q9- Who is the most obsessed person you know (other than you) that loves 1? klaine_forever.
Q10- You get to write what happens/happened to 3. What would you write/change? In season 3 they become a couple.
Q11- What's 2's shipping name? Finchel.
Q12- Favourite episode/scene of 3? 3x22 Goodbye.
Q13- Does anyone in real life know you ship 2? Yes.
Q14- Do you also ship 1's actors? Yes love CrissColfer <3
Something to say? Sign in with one of these options:
Log in to Fanpop! Not yet registered? Create a new Fanpop account!