1
a good sequel and a worst sequel
posted by Pyjamarama 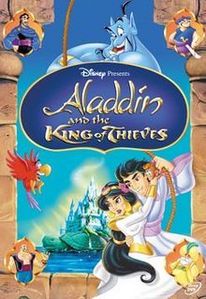 Aladdin 3
aladdín (Scott Weinger) and Princess jazmín (Linda Larkin) prepare for their marriage. aladdín recovers a dagger, his only memento of his lost father, who had abandoned his family when aladdín had been a small child. During the ceremony, they and the assembled guests find themselves the targets of a raid por the infamous Forty Thieves, led por a man named Cassim (John Rhys-Davies), who is after a particular piece of treasure: a staff which is the receptacle of a powerful oracle. Aladdin, Abu, jazmín and the Genie fight back against the thieves, driving them off. They discover the Oracle, who has the power to answer a single pregunta about absolutely anything to any individual. When Iago accidentally asks her why the thieves want the staff so badly, she says that they were looking for the "ultimate treasure". Learning of the Oracle's power, aladdín become curious about his past. She hints to him that those preguntas can be answered por his father, who is still alive much to Aladdin's shock. After some encouragement from Jasmine, aladdín asks the oracle about his father; the oracle reveals that his father is with the Forty Thieves, "trapped within their world".

Aladdin, along with Abu, Iago and Carpet, tracks them down and stows away into their hideout, Mount Sesame. He is shocked to find that Cassim is the thieves' leader. Sa'luk (Jerry Orbach), Cassim's subordinate tries to punish aladdín from entering. Cassim, however, slyly suggests that aladdín instead face "the Challenge"—an initiation ritual—where he must defeat another one of the Forty Thieves and take his place. Sa'luk fights Aladdin, but the latter just barely manages to prevail por throwing his opponent off a cliff into the sea. He is welcomed into the band, and Cassim reveals to aladdín why he had left his wife and son: to find the Hand of Midas, a powerful artifact that can transform anything it touches into gold. Cassim believed that, with the Hand, he could return to his family and give them the life they deserved instead of one living out in the streets, and had instigated the raid so he could capture the oracle's staff and pregunta the seer as to the precise whereabouts of the artifact.

aladdín convinces Cassim to come back with him to the Palace as his guest and, for a while, Cassim is happy to spend quality time with his son. Cassim meets with jazmín and the Sultan, and they immediately take a liking to Aladdin's father. Cassim decides to carry on his original scheme with Iago as his new henchman. Meanwhile, Sa'luk makes his way to Agrabah. He reveals himself to Razoul and sells out his fellow thieves por telling Razoul the contraseña to their hideout in exchange for immunity from prosecution. After 31 of the thieves are captured, Sa'luk tells them that aladdín is one of the forty, and his father Cassim is the King himself.

While attempting to steal the Oracle from the palace treasure chamber, Cassim and Iago are captured por the royal guards and Razoul reveals to the Sultan that Cassim is the King of Thieves. The Sultan has Razoul detain Cassim and Iago in the dungeon for life. aladdín frees Cassim, but is discovered por Razoul. Despite being a criminal, aladdín returns to the palace to take responsibility for his actions. The Sultan prepares to punish Aladdin, but Genie and jazmín come to his defense, stating that all he wanted was to give his father a segundo chance. The Sultan accepts his apology, much to Razoul's dismay.

With the oracle in hand, Cassim and Iago return to Mount Sesame, only to be captured por Sa'luk and the remaining Thieves. Cassim is forced to use the stolen oracle in order to find the location of the Hand of Midas and then lead his men there. The Oracle directs them to The Vanishing Isle, a great marble fortress built on the back of a gigantic undersea tortuga that periodically dives to the bottom of the ocean, where the Hand is hidden. Iago flees from the group, and goes off to lead aladdín and Jasmine, Abu and Carpet to his imprisoned father.

aladdín manages to free and reconcile with his father. Working together, they retrieve the Hand just as the tortuga is beginning to submerge, when they are attacked por Sa'luk. While trying to flee from the flood Sa'luk takes aladdín hostage, demanding that Cassim surrender the Hand. Cassim throws the Hand of Midas to Sa'luk, but Sa'luk turns into a oro statue after grabbing the Hand and Cassim and aladdín flee. Having discovered that his obsession with the Hand can cause destruction, Cassim decides to toss it into the sea, realizing that his ultimate treasure is actually Aladdin. The Hand of Midas lands on the ship with the remaining thieves aboard, turning it into oro and sinking it.

aladdín and jazmín finally get married, with Cassim attending in the shadows, as he is still wanted for his crimes. Also among the guests are several cameos from characters from the TV series. Iago decides to registrarse Cassim as a traveling companion, and they both go off once again to see the world.

A reprise of Arabian Nights is then sung; the Peddler makes an appearance at the end of this film to mark the end of the legend of aladdín (originally planned for the end of the first film) as aladdín and jazmín fly past him and wave good-bye to Cassim and Iago.

Mowgli is living in the Man Village with the girl who lured him in, Shanti, his adopted brother Ranjan, and their parents. However, Mowgli longs to return to the fun of the jungle, and after nearly leading the other children of the village into the jungle, is punished por his adopted father for trying to lead them into danger. Meanwhile, in the jungle, Shere Khan has returned to Baloo and Bagheera's part of the jungle to exact revenge on Mowgli. Baloo sneaks into the Man Village and gets Mowgli to come with him to live in the jungle; however, unbeknownst to them, Shere Khan also infiltrated the village, only to be chased off por the village people. In the ensuing chaos of the tiger's attack, Shanti and Ranjan go into the jungle to retrieve Mowgli, believing that Baloo is a hostile animal and kidnapped the boy.

Bagheera hears of Mowgli's departure from the village when the humans buscar the jungle for him, and immediately suspects Baloo. Mowgli instructs Baloo to scare off Shanti should she appear, and bemoans the boring life he had in the Man Village. Baloo and Mowgli journey to King Louie's old temple (King Louie is mentioned to have abandoned it), however when the animales of the jungle mock Shanti and other aspects of Mowgli's life in the Man Village, the boy leaves, offended. He runs into Shanti and Ranjan, but Baloo scares Shanti as Mowgli wanted him to. When the truth comes out that Mowgli ordered Baloo to scare her, Shanti and Ranjan run away and leave Mowgli.

Baloo recognizes that Mowgli misses his old life, but when Mowgli tries to make amends with his human friends, they are attacked por Shere Khan. The tiger chases Mowgli and Shanti to a temple built above a lake of lava, and Baloo leaves Ranjan with Bagheera while he goes to protect Mowgli. After confusing Shere Khan por banging several different gongs, Shanti's prescence is revealed to Shere Khan. Baloo fights Shere Khan just as Mowgli is about to give himself up to save Shanti, but the tiger chases the two children to a statue across a pit of lava. Shere Khan is trapped within the statue's mouth, and it plummets into the lava below. With his nemesis defeated, Mowgli returns to the Man Village with Shanti and Ranjan, but they still visit Baloo and Bagheera in the jungle regularly. 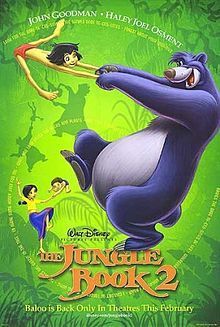 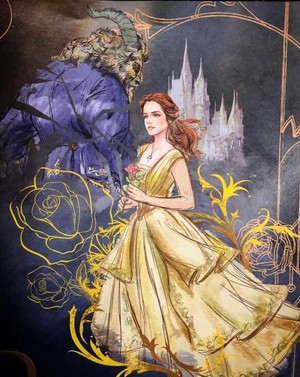 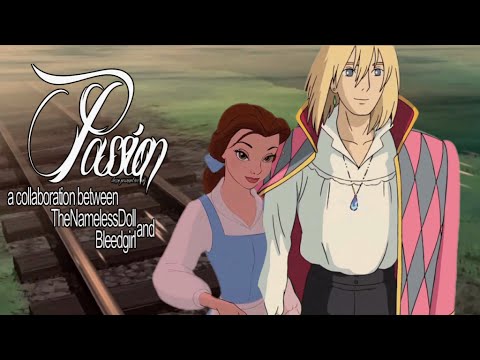 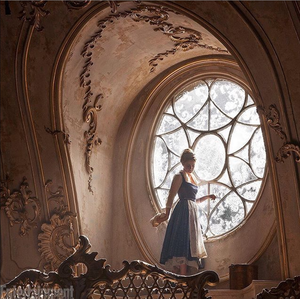 Beauty and the Beast (2017)
added by DisneyPrince88 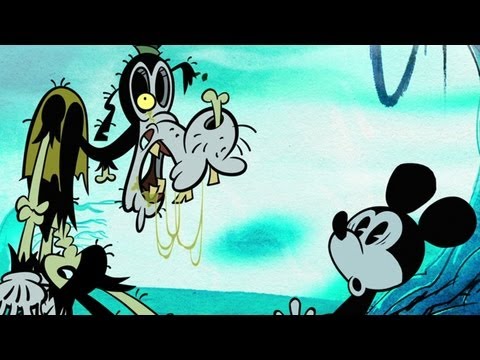 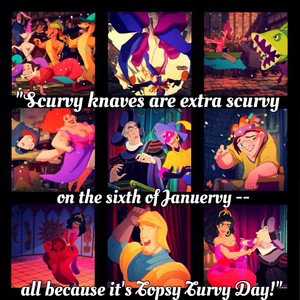 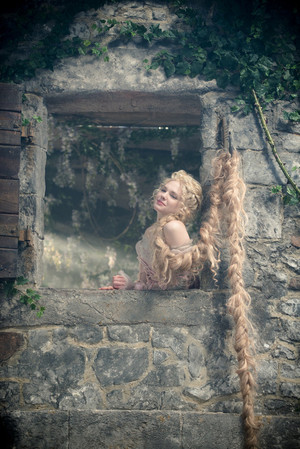 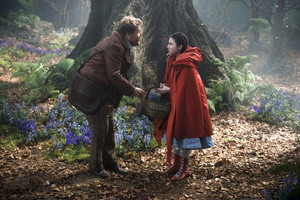