1
Buffy vs. ángel
posted by bendaimmortal
If Buffy had died while Faith was in a coma...they wouldn't have called on another Slayer?? I mean, according to the tradition it would've required Faith's death to bring the siguiente one along.

But then again, they don't really follow the Slayer "rules" anyway and whatever they do doesn't follow logic. Like, Kendra and Faith were good and experienced as a Slayers when they were sent to Sunnydale though it was long known that Buffy was alive after all. And even with those duos happening they still took five más seasons to realize that hey, why not make all the potential ones active and thus be más efficient.
Also, judging por the potentials in the last season, they don't care enough to actually train the potentials BEFORE they're activated even though for some reason they are dado watchers and knowledge beforehand.

Aso, the famous bit "to every generation is born a Chosen One", she alone can..:" - Yet apparently every generation has a whole bunch of chosen ones - that is completely contradicting the scripture, and they exist long before the previously active Chosen One dies and at points más than one of them were together - as in no one is actually the onlly one capable in any way.

It's a great series, I amor it, but it surely would be so much stronger if the very premise wasn't this full of contradictions and lack of logic. It could've been written much better in itself. This remarkable sloppiness of escritura has lessened the series' shine for me.

But I anyway enjoy it mostly for its hilarious, interesting and witty dialogue, and some brilliant characters and relatiosnhips such as Buffy and Giles.

But "Angel" the TV series is so much más pulled-together about its premise and más "grown up" with its darkness and themes, and thus somewhat better as a whole. Yet I still end up watching Buffy the Vampire Slayer" más often because of the dialogue and relationships between some of the characters. 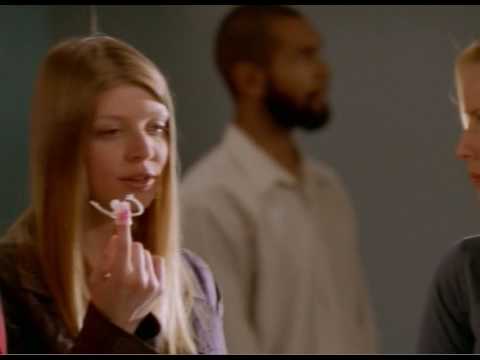 2
Spike and Harmony - Where Is My Mind
added by spikes_girl
Song is "Where Is My Mind" por The Pixies. All clips belong to Joss Whedon.
video
spike
harmony
where is my mind
Buffy, la cazavampiros
ángel

2
Buffy the Vampire Slayer Bloopers
added by spikes_girl
A video of BTVS bloopers. Not mine!
video
bloopers
Buffy, la cazavampiros