Ponies On The Rails: Stolen Parts Part 3
posted by Seanthehedgehog 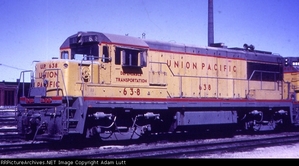 Seven of these engines are being delivered to Cheyenne by Hawkeye
Date: September 25, 1959
Location: Denver, Coltorado
Time: 9:56 AM
Railroad: Union Pacific

Hawkeye entered the train yards, and saw the engines he had to bring to Cheyenne.

Hawkeye: *Gets out of his engine, and looks at the new engines*
Mirage: *Arrives* Lovely locomotives, aren't they?
Hawkeye: Where did tu come from?
Mirage: Pete had me drive a freight train carrying gasoline, and livestock here.
Hawkeye: Gasoline, and livestock? That doesn't sound like a good combo.
Mirage: Yeah, Pete told me to be careful.
Yard Pony: *Arrives* Are tu the two ponies delivering these engines to Cheyenne?
Hawkeye: Yes.
Yard Pony: tu better get going. We're expecting a freight train with fifty five freight cars.
Hawkeye: We're on our way. *Couples his engine to the new engines*
Mirage: *Climbs into the engine cab*
Hawkeye: *Climbs into the engine cab, and drives the train*
Mirage: We're on our way.
Hawkeye: To tell tu the truth, I think it's great that we're getting new engines, but what we really need are new parts.
Mirage: They're más expensive. It was cheaper to order new engines.
Hawkeye: Alright, I didn't know that.

Pete: *Signing papers*
Percy: *Enters Pete's office* Denver just called. They say that Pierce, and Nocturnal Mirage are on their way over here.
Pete: Ah, good. I have a new job for tu Percy. While Pierce, and Mirage are delivering the new engines, I want tu to repair the track on Archer Hill. Some of the spikes are loose.
Percy: I can fix it.
Pete: And bring Jeff with you. It'll be too hard to fix the track on Archer colina por yourself.
Pete: Okay. *Leaves the office*

Hawkeye, and Mirage just got out of Denver, when they saw a red signal in front of them.

Hawkeye: *Stops the train*
Mirage: What seems to be the problem?
Hawkeye: I don't know. Our line seems clear. Signals stay red until a train gets a mile ahead of it. I can see five miles ahead of us, and there is no train.
Mirage: Perhaps the tracks are in bad condition?
Hawkeye: No, they seem okay. Something is not right here.

A bullet hit the window in the engine's cab.

Mirage: I think I know what tu mean. *Sees gangsters running toward the train with guns*
Hawkeye: Red signal, o not, I'm moving forward. *Drives the train*
Gangsters: *Shooting at Hawkeye, and Mirage*
Mirage: Why do they want us dead? We don't have anything valuable.
Hawkeye: New engines. They could steal them, and sell them to a different railroad for half price.
Mirage: How would they do that?
Hawkeye: Get forged papers, and ID cards, and no one would know they were gangsters. Instead, they would think they were workers for the U.P.
Mirage: Christ. Why can't those gangsters just stay on the streets, and kill ponies there? They always want to steal stuff from us.

1
My Little poni, pony Colouring Sheets - Princess Cadance
added by 2436racbuc
4
parte superior, arriba Ten Most Hated MLP Characters (Fan Voted)
posted by windwakerguy430
Hello everyone. Its finally time to present the ten worst MLP characters that tu voted for. Now remember, i their is a character that tu didn't see here, remember that tu were the ones who voted for these characters, and I'm just placing them in order of votes. now, lets start